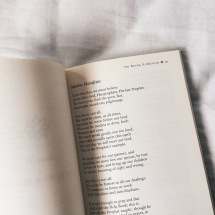 If you’ve been following my Instagram, you’d know that he’s one of my favourite poets. I first discovered his book of poems in a small bookshop in Mecca. I’m a fan of the way he purposefully weaves his words and how he uses poetry to address various topics like the Qur’an, our Muslim identity, love, and war. I’ve always been on a lookout for more poems that are grounded on faith and which also uses beautiful words to give insights into His most beautiful word, and he’s probably the first I’ve been serendipitously acquainted with.

“God is the Light
Of the Heavens and of the Earth;
His Light is a parable, of
A Lamp within a niche; without the lamp, a glass
Haloed as a brilliant star, lit
From an olive tree, blessed;
Whose soil is neither East nor West;
Its very oil would shine forth
Though untouched by fire:
Light upon Light.
God raises to His Light whom He will;
He engenders parables for men, He
Whose knowing is beyond horizon.

His Light abides in houses, sanctified
For the adoration of His Name. There
Is He glorified, morning and evening
By those whom trade nor profit can
Divert from remembrance of their God
Or from steadfastness in charity and prayer;
Whose sole fear is for the Day
When heart and vision awake
In a new world
Where God rewards their deeds
Giving ever more from His Grace
For God furnishes measurelessly
Those whom He will.

But behold the unbelievers:
Their deeds are like a mirage
In the burning desert: the parched man’s eyes see
Water in the distance; approaching, he finds
Nothing;
Beside him, he finds God, before Whom
He must answer: God,
Whose reckoning is swift.

Or, like darkness on a fathomless sea,
Wave over wave, overcast by cloud:
Darkness upon darkness;
If a man stretch out his hand,
He can scarce see it.
For those deprived of God’s Light
There is no Light.”